Indian cuisine consists of a variety of modern and traditional food. Indian cuisine is influenced by the diversity in climate, soil type, culture, occupation, and region. All the food is made from available spices, vegetables, and fruits. The food is also influenced by religion. This cuisine has many flavors and here, we come up with 12 facts about Indian cuisine which will stir your interest.

Do you know why Indian food is so delicious with tantalizing taste? It is because of the spices Indians have. India is the largest producer of spices in the world and produces approximately 70% of the world’s spices.

3. Influences From Other Countries

India has had plenty of exposure to cuisines from all around the world. It has been influenced by various cuisine over the years, from Arab and the Mediterranean to Persian and central Asian. It might be surprising that the lip-smackingly delicious samosa originated in the Middle East and Central Asia, and most loved desserts like Gulab jamun and Jalebi originated from Persia.

Tomatoes, potatoes, sugar, and chilies which are known as the modern Indian staples are not Indian. They are borrowed from the Portuguese when they came to trade from India around the 15th and 16th centuries. Rajma originally is a staple Mexican food item.

Whoever says that Indian cuisine is only spicy, tell them about the six kinds of tastes Indian cuisine which are sweet (madhura), salty (lavana), sour (amala), pungent (katu), and astringent (kasya).

In 1809, the first Indian restaurant in London was opened, the Britishers have had an affinity for Indian food from so long, Indian cuisine is so much popular in London that it’s reported that London now has more Indian restaurants the Mumbai.

The majority of India’s population doesn’t follow a vegetarian diet, still, India ranks second in the lowest consumption of meat per person. According to a survey conducted by the government of India, only about 29% of the total population follows a vegetarian diet.

India is the first country that started the crystallization of sugar from sugarcane juice – a widespread practice by the 5th century C.E. It was locally known as khanda, by which the word candy originates.

You know what, the most common Daal chaawal/ daal Bhatt did not originate from India, it has its origin from Nepal. Chicken Tikka Masala which is found in almost every restaurant India was invented in Scotland. Saffron which is found in most Indian desserts was brought by Greek, Arab and Roman traders. Shocking!!

Black rice is only found in India and China, this unusual rice type is black and when cooked, turns into purple. It has a nutty flavor and aroma which is a little similar to brown rice but is totally different from white rice.

Bandel is a type of cheese produced in India which is said to have been inspired by the Portuguese. Bengal is known as the hub of Bandel cheese production. It is highly aromatic and has a dry and crumbly texture and gives a smoky flavor. 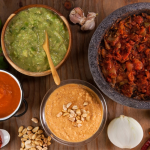