Panamanians use a lot of sponge cake and tropical fruits like pineapples and coconuts. Even with these common ingredients, each dessert is unique and delicious. Here is your guide to the desserts you really need to try when you’re in Panama.

This is basically rice pudding. It is simply rice which is cooked with milk and cinnamon. It is served cool and cinnamon powder can be sprinkled to garnish. As simple as it sounds, this is definitely going to be one of your memorable desserts.

Bienmesabe literally means “it tastes good”. It tastes a lot like cooked condensed milk. It is eaten with white cheese. The white cheese is eaten separately because Bienmesabe is too sweet. The salty taste of the cheese balances the sweetness well.

This is an upside-down/flipped pineapple cake. The pineapple slices are placed at the bottom of the pan while making and then flipped over to reveal a beautiful pattern of the slices. The cake under the slices is a simple vanilla cake that allows the taste of the pineapple to pop.

Nance happens to be a fruit. They are a type of yellow cherries. Pesada is a smooth and cooked cream. It is prepared with nance, water, sugar, and cornstarch. It is served topped with cheese.

In Panama, you will find these delicious cakes everywhere, from restaurants to street vendors. They are quite the favourite during parties too. Sopa borracha is basically a sponge cake soaked in a strong syrup made with rum, muscat wine, and sherry. It is garnished with dried fruits. Spices like cinnamon, clove, and lemon are added as well.

This dessert translates to “king’s snack”. And this dish is as royal as it sounds. Another sponge cake dessert, this one is soaked in a mixture of chocolate. It is served cold.

Bocado De La Reina is Bocado Del Rey’s counterpart, the “queen’s snack”. This one requires sponge cake too, but it is quite different from the previous one. Instead of chocolate, the cake squares are soaked in a thick sugary raisin and prunes mixture. It can be decorated with egg white meringue.

This dessert is basically a huge ice cream cup with a layer of biscuit, vanilla ice cream, Chantilly whipped cream and a secret sauce. This dessert will leave you wanting for more and yet, very satisfied.

Raspados are Panamanian snow cones. They are topped with sweet syrups and condensed milk. One can even ask for a little bit of fruit to be added on top sometimes.

Flan de Caramelo is simply caramel flan, as the name suggests. A very simple but popular dessert. It is popular for the nostalgic feelings it builds within Panamanians as it is a traditional dessert, best served at home.

This is a delicious pineapple jam, also known as pineapple candy. It is like the Panamanian version of Muraba as we have in India. Very simple to prepare and the homemade version of this is always the best bet to get the most authentic taste.

These are basically fried bread made from baking powder, flour, and eggs. It is served with sprinkled sugar. It makes for the perfect breakfast item. It pairs well with coffee. To minimize the extra sweetness, black pepper can be sprinkled on top before eating.

They are baked balls made from coconut, cornstarch, vanilla and almond extract along with condensed milk. These are yummy and pretty sweet, almost like cookies. The coconut flavour is quite dominant in this dessert.

These are fried and sweet plantains. This dessert uses softened plantains that are softened while being cooked in butter, vanilla, and cinnamon. This dessert screams “sweetness overload!” 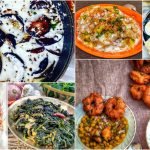