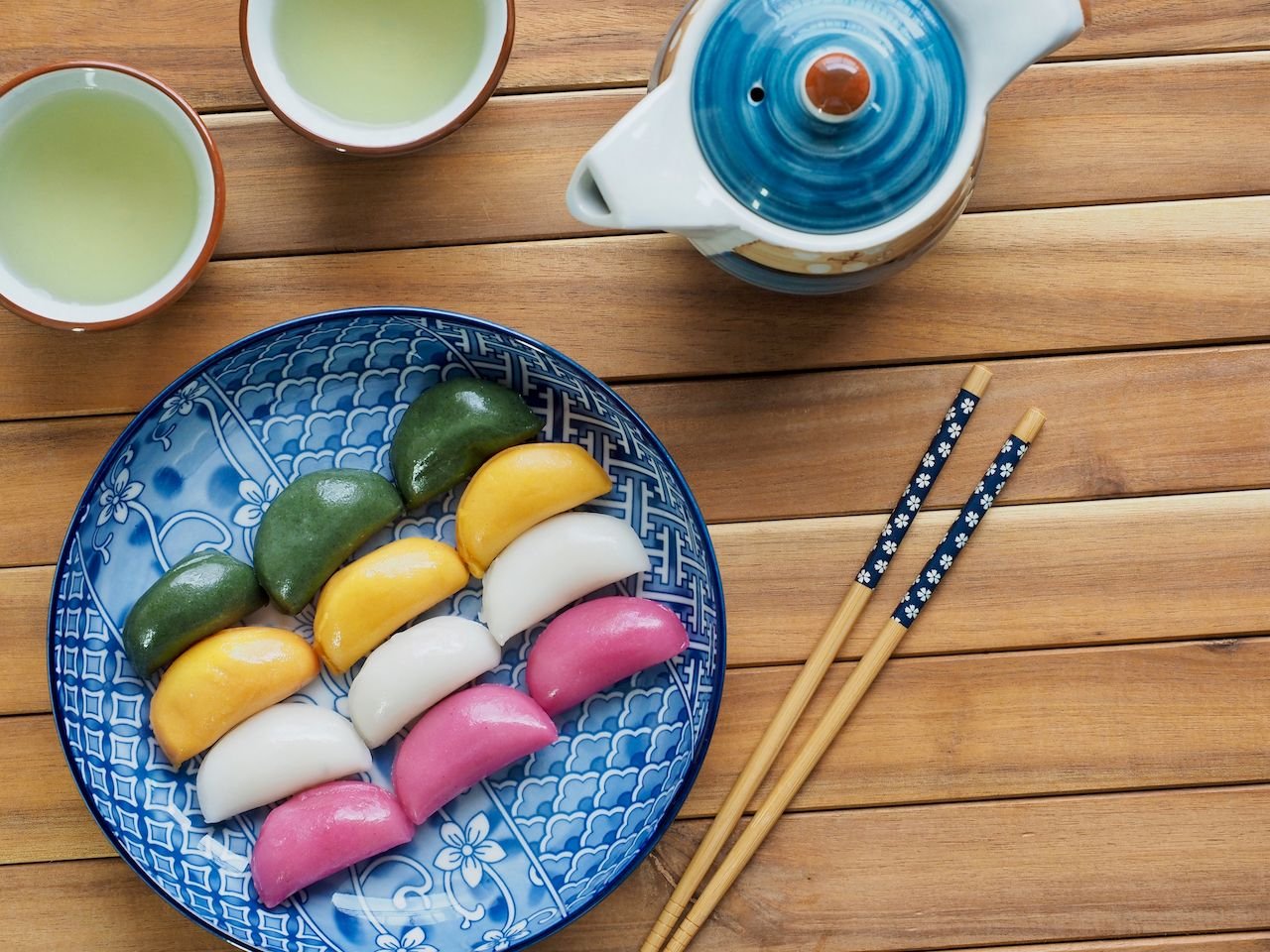 Traditionally, Korean meals are not usually followed by desserts at the end. The sugary things in this category are meant to be served on special occasions, by themselves as refreshments or with tea. But if you got a sweet tooth, who’s gonna stop you. so let’s dwell into some Korean sweetness with popular desserts of Korea.

– is a fish-shaped pastry, stuffed with sugar-soaked red bean paste. It is one of the most common seasonal street food in Korea, often sold at street stalls, grilled in a machine similar to a waffle iron, but with fish-shaped molds. Although, red bean paste is the standard filling, many bungeo-ppang that are sold as street food are filled with pastry cream (called “choux -cream” in Korea), pizza toppings, chocolates and so on.

Chapssal-tteok, also called , is a tteok or Korean rice cake is made of glutinous rice.

Chapssal-tteok can be prepared in several ways. Glutinous rice is soaked, ground into flour and then steamed in a (rice cake steamer). The rice may or may not then be thumped. Sometimes the rice is ground after being steamed.

Chapssal-tteok can be coated with  (powdered sesame or beans) and steamed or it may be boiled and then coated. It can also be made round and filled with various so (fillings) such as red bean paste. Chapssal-tteok ice cream is also popular in modern South Korea. It is featured in some fusion Korean dishes.

Hwangnam-, also commonly called Gyeongju bread is a common specialty of Gyeongju City, South Korea. It is a small pastry dough with a filling of red bean paste. Gyeongju bread was first baked in 1939 at a store in Hwangnam-dong in central Gyeongju.

It has since become widespread across the country and is created by several different companies, all based in Gyeongju. It is sold at many locations within the town and also at specialized stores around the country.
Gyeongju bread is composed of a mixture of eggs and wheat flour, with the red bean filling being virtually seventieth of the pastry.

A chrysanthemum would be traditionally imprinted on the top. Gyeongju bread has been designated as Associate in Nursing “Outstanding regional specialty” by the Korean government.

Hoppang is a warm snack that is sold throughout Korea. It is a convenience food version of jjinna (steamed bread) and is typically filled with smooth, sugary red bean paste.

Typical hoppang is filled with sugary red bean paste, but it is also commonly sold filled with vegetables and meat, pizza toppings, pumpkin, or buldak.

Pre-made hoppang is often available in multiples at supermarkets and grocery stores, while many convenience stores sell hoppang throughout the winter months in cylindrical heating machines designed to steam and keep them warm.

Hotteok is a stuffed Korean pancake and is a portion of popular street food in Korea. The dough for is made from wheat flour, water, milk, sugar, and yeast, then left to rise for many hours. Small-sized balls of this stiff dough are filled with a sweet mixture, which may contain brown sugar, honey chopped peanuts, and cinnamon. The filled concoction is then placed on a greased griddle and pressed flat into a large circle with a special tool with a stainless steel circle and wooden handle as it cooks.
In Korea, ready-made dry mix is commercially available in plastic packagings. The mix also comes with a filling consisting of refined sugar and ground peanuts or Sesamum indicum seeds.

Kkultarae, also known as Korean court cake, is a Korean dessert and the variation of Dragon’s bread candy. A hard dough of honey-maltose mixture is kneaded, twisted, and stretched (pulled) into 16,384 skeins of silky threads, in which assorted candied nuts, chocolate, or other fillings are wrapped. The mildly sweet, bite-sized treats were eaten in the royal course in the past. Nowadays, it has been marketed to symbolize wishes of health, longevity, and fortune to the consumer or recipient.

Melona is a South Korean flavored ice pop, manufactured by the Binggrae Co. Ltd. Although the product is called “Melona” and is identified by its melon flavor, the ice pop also comes in other fruit flavors. Each bar contains 130 kcal of energy. Its other flavours are:

Patbingsu is a well known Korean cold desert (shaved ice cream) with sweet toppings that may include chopped fruit, condensed milk, fruit syrup, and red beans. Patbingsu with ingredients other than red beans is called bingsu (or bingsoo).

There are various of patbingsu types and flavors. Many bingsus do not necessarily follow tradition and some do not include the red bean paste. Some common flavors are green tea, coffee, and yogurt.

Yakgwa also called gwajul is a type of yumil-gwa, which is deep-fried, wheat-based hangwa (Korean confections). The sweet was presented in a jesa (ancestral rite) and enjoyed on festive days such as chuseok (harvest festival), marriages or hwangap (sixtieth-birthday) celebrations. In South Korea, it is also served as a dessert and can be bought at traditional markets or supermarkets

The dough is made by kneading sifted wheat flour with  oil, honey, ginger juice, and  (rice wine). Yakgwa gets its shape by being pressed into flower-shaped wooden called -pan or flattened with a mallet and cut into squares. Depending on the size, yakgwa is classified into – (large), – (medium), and so- (small). The ones shaped into squares or rectangles are called mo-(angular ).

Cut pieces are slowly deep-fried at a relatively low temperature, around 120–140 °C (248–284 °F). These are then soaked in honey, mixed with cinnamon powder, and dried, which gives the  a sweet taste and a soft, moist texture. The desert may also be sprinkled with such as pine nuts or sesame seeds.

Hangwa is a general term for traditional Korean sweets. With tteok (rice cakes),  forms the sweet food family in Korean cuisine. Hangwa has been used in traditional ceremonies such as jerye (ancestral rite) and  (wedding). In South Korea, hang is also available at coffee shops and tea houses.

Ingredients used to make  include grain flour, fruits and roots, sweet ingredients such as honey and , and as cinnamon and ginger.

Tteokbokki- Korean rice cakes created with steamed flour product of numerous grains, as well as gluey or non-glutinous rice. Steamed flour may be pounded, shaped, or pan-fried to create tteok. In some case, tteok is pounded from baked grains.

Tteok has been enjoyed not solely as desserts or seasonal delicacies, but also as a meal. It can vary from elaborate versions manufactured of varied colors, fragrances, and shapes with loco, fruits, flowers, and namuls, to plain white rice tteok used in home cooking.

Tteok is usually food that is shared. Tteok offered to spirits area unit known as boktteok (good fortune rice cake) and shared with neighbors and relatives. It is conjointly one in all the occasion foods in banquets, rites, and various celebratory events. Tteokjug (rice cake soup) was shared to celebrate the new year and Songpyeon was shared on the harvest festival. 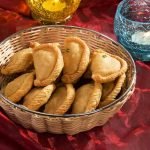 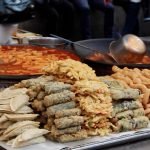