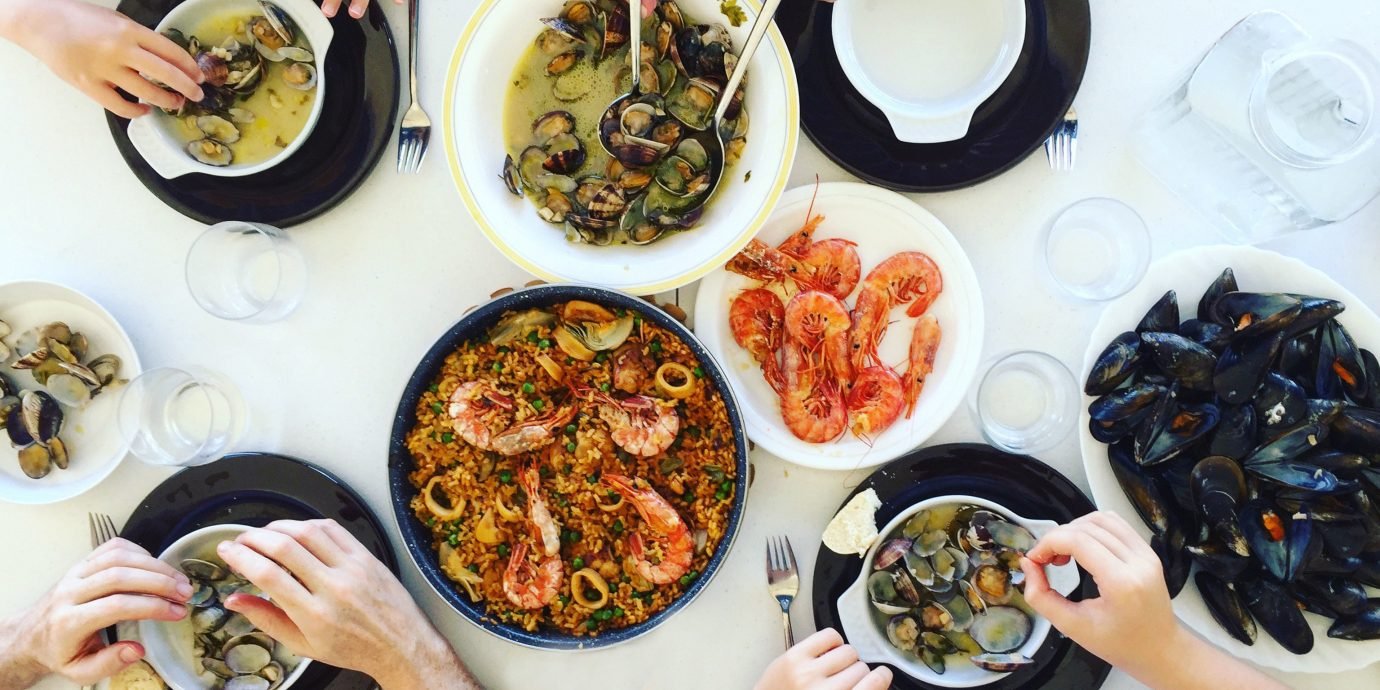 Pizza, croissants, creme brulee, pasta .. Do we need to go on? Of course, Europe is home to some of the most incredible dishes. When you are on a trip do not forget to try these dishes in Europe. Read on for 25 dishes you must try when in Europe:

The main ingredients of Arancini are rice and meat. They are stuffed balls of rice coated using bread crumbs and deep-fried, can be filled with mozzarella or caciocavallo cheese.

It is an extremely popular dish in Bulgaria. Prepared by layering whisked eggs and slices of cheese between the layers of filo pastry and baked in an oven. Generally, lucky charms are sneaked into this dish during New Years’ Eve.

3. Cevapi in Bosnia and Herzegovina:

Cevapis are grilled sausages or kebabs from the South of Europe. They are easy to make and are an explosion of flavours in the mouth. Served best with flatbread and slices of onions.

Promoted as a Swiss National Dish, cheese fondue is Swiss melted dish served in portable pots with melted cheese under which there is a sort of a stove heated with a candle or some stove to keep the cheese warm. It is eaten by dipping bread in cheese using long-stemmed forks.

Churros are a type of dessert originated in Spain. They are basically long sticks of rolled batter which are fried and then topped with some powdered sugar and served with a side of either dark chocolate, white chocolate or milk chocolate which adds to the taste of the churros.

Crepes are basically thin pancakes which can be served with either sweet or savoury topping including some like strawberries, jams, Nutella, whipped cream, cheese and many more.

Germans love their currywurst. It is often eaten as a take-away snack made of steamed and then fried fork topped with some ketchup, tomato-based curry and several other spices.

8. Fish and chips In England:

England is known for many things, one of them being the place where fish and chips originated. This dish consists of fried fish, some tartar(white) sauce along with a side of fries(chips).

Perfect way of ending any European meal is with some scoops of the delectable gelato ice cream. It is an Italian dessert with the base of milk and sugar. Generally low in fat as compared to other ice creams and denser in texture.

Gogoasas are tiny doughnuts that either come with a filling of jam or plain. Gogoseriis are small doughnut shops that sell these doughnuts.

The Europeans like having their Goulash on chilly nights. It is a stew of meat and vegetables including many spices and flavours. Made in cream and parsley which adds to flavour’s richness.

It is said to be probably originated in Greece. Gyro is a type of a sandwich stuffed with lamb or pork along with tomatoes, onions and some yoghurt. All this is placed over a pita bread

Haggis is the national dish of Scotland and is a pudding( Savoury ) made of the organs(liver, heart and lungs) of a sheep. Seasoned with peppers, onions and other spices.

14. Halloumi and watermelon In Cyprus:

Halloumi and watermelon is a salad in which juicy watermelons are used along with some basil leaves and halloumi cheese. It is an ideal summer-time meal.

Kissel is very popular and loved, both as a dessert and as a drink. It’s made of berry juice. Red wine is also added to it sometimes. Its consistency is thin and as it is the extract of berry, it is red in colour.

Kottbullar is meatballs made of ground meat rolled into small balls along with other ingredients like onions, peppers, bread crumbs, butter etc. Meatballs are of different kinds depending on the meat and spices. They can be steamed, fried and baked.

Also known as Turkish or Lebanese Pizza, it is made of a thin crust topped with minced meat, onions, tomatoes, spices and herbs and then this preparation is baked.

Moussaka is basically an eggplant or potato-based dish which often also includes meat. It can be compared to lasagna due to the layers both the dishes form. A layer of omelette, then baked potatoes, or pasta, or beans with basil leaves and other herbs and spices.

It is a different kind of a pizza made of tomatoes and mozzarella cheese. This pizza also gave rise to the New York style pizza. The most simple pizza, which not more than three to four ingredients. The layer of pizza sauce, block-chopped onions or tomatoes and wholesome mozzarella cheese with some herbs.

According to the locals, any try is incomplete without having Perepichka from the small stalls located across the city. It is a kind of a hotdog sausage in a slightly sweet dough that is fried.

Pierogi is European style dumplings whose fillings can be sweet or savoury and are either boiled or steamed before eating. Dumpling or momos, they all are served with soup, and this too is served with hot soup, not aside, but by dipping in it.

It is a dessert that resembles pancakes. They’re smaller as compared to pancakes. Made of buckwheat flour and yeast that gives a light and fluffy texture to them. It is a sweet treat for the mouth.

It is a baked bread product made of dough. Pretzels are hard and crispy on the outside and soft on the inside. They were originated in Europe. Pretzels are generally given the shape of an ‘unsymmetrical twisted knot’. They are also commonly eaten as sandwiches with fillings consisting of cheese, salami or butter.

Simit is a circular Turkish bread topped with sesame, poppy, flax or sunflower seeds. It is available in different regions but the taste and texture vary through regions.

‘Tortilla’ in Spanish means a small cake. A tortilla is like a small cake or a flatbread made out of corn or wheat and is very famous in Spain. Tortillas can be compared with Indian bread, i.e. roti.

This snack is often referred to as a ‘chimney cone’ because of its shape. The outer dough is grilled over a fire or fried and dusted with sugar and cinnamon. Nutella can be added to make it a sweet chimney cone, but savoury cones, loaded with cheese and fries or some macaroni are also as delicious as the sweet ones.

Waffle is a dish made of batter or dough, which is poured inside a hot iron machine which has two plates and gives the waffles its shape. Waffles have got many variations now. They’re served sweet as well as savoury. Waffles have become extremely famous worldwide and are loved by all.